Brief History of Soviet Design: From Suprematism to cute Mishka 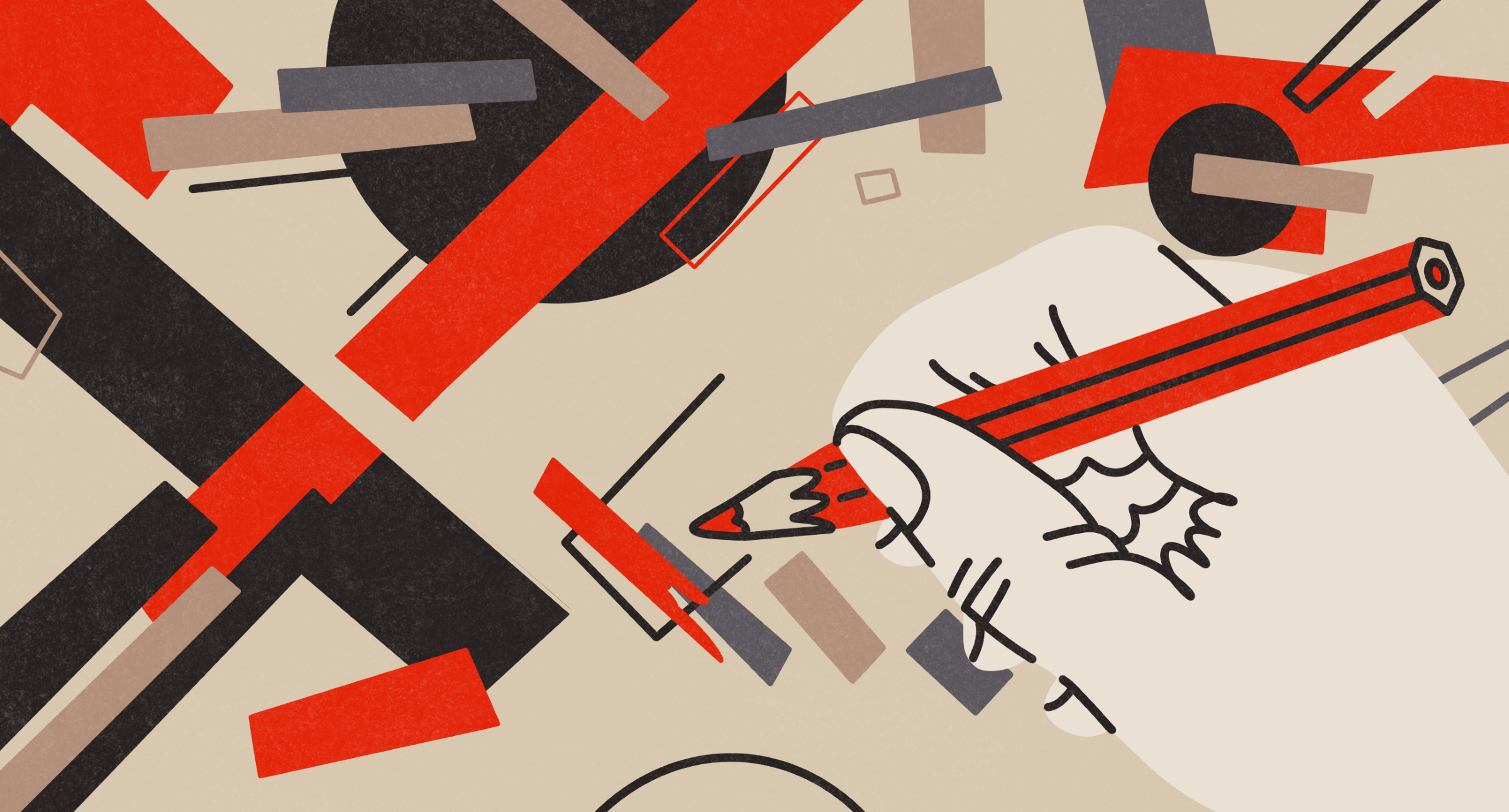 An overview of Soviet Design, from Lissitzky and Rodchenko to what we can see today

The cultural heritage of the USSR was more than big hats and ugly buildings. There was a powerful design tradition growing beyond the Iron Curtain, that is now largely discarded and forgotten.

While the Soviet design is a lot of things — polarizing things too, from product design featuring some flashes of brilliance next to knockoffs of western products under a new logo, from brutalist architecture that both had some amazing feats of engineering next to absolutely dreary city blocks, and so on — in this article, we’ll mostly focus on the graphic design in particular. For one simple reason: we simply can’t fit everything into a single article.

But before we get to the history of Soviet design itself, we’ll need some cultural context. Here are some advertising posters from Imperial Russia:

We wouldn’t venture to call them decadent, but they’re certainly too busy, too much focus on the aesthetics and not enough on the actual products. And on the other hand, this is the time of rising abstract art, stepping away from the unnecessary and the literal.

What follows is an all-too-brief period of artistic freedom and experimentation, following in the footsteps of these giants. 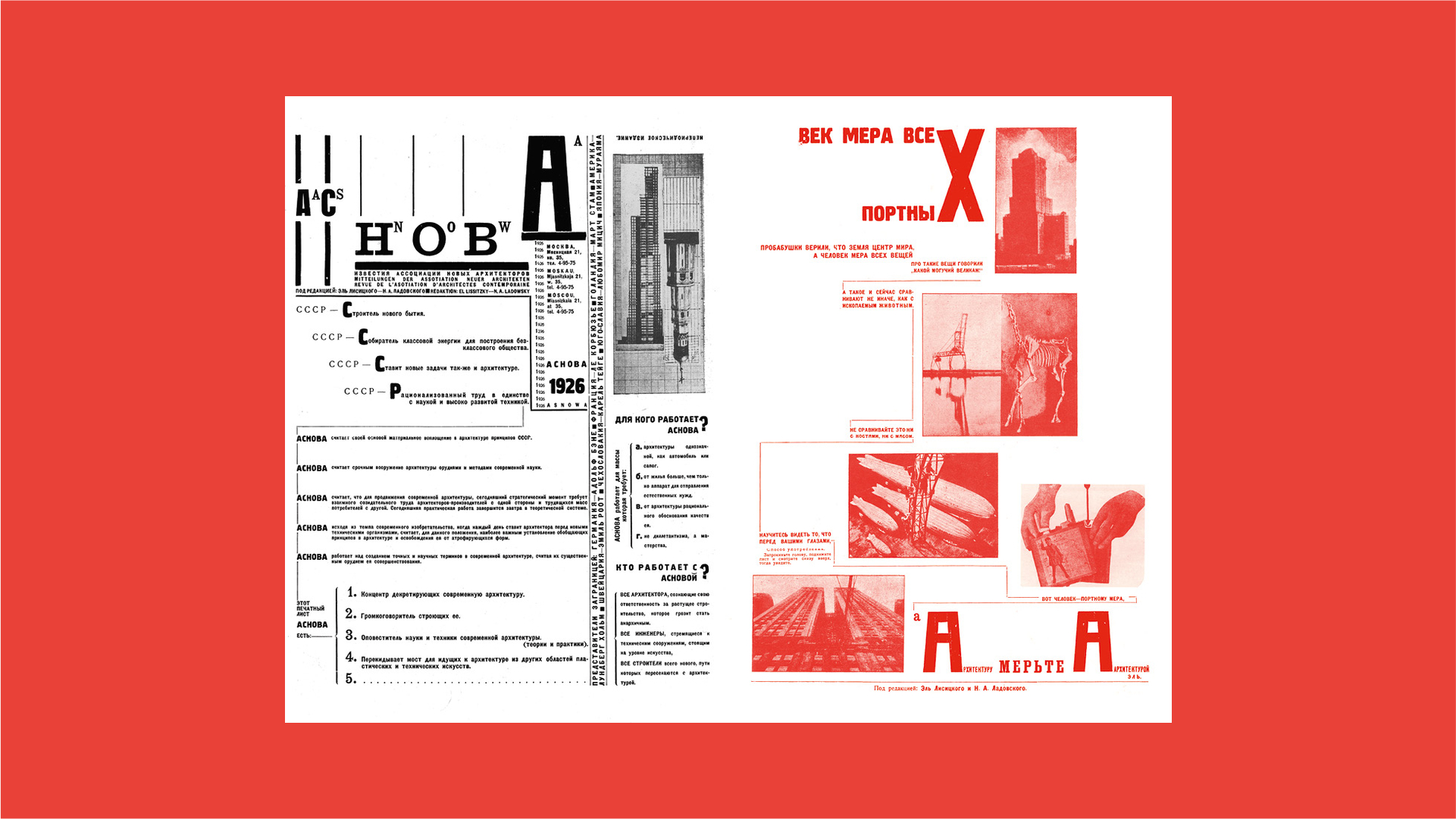 While the free world had Bauhaus, the union had VKHUTEMAS (an acronym for Higher Art and Technical Studios). The school and the USSR as a whole never had the word “design”, but the intermingling of courses in technical and artistic pursuits led to VKHUTEMAS being the center for avant-garde art. And not only art but also the design works that look cutting edge to this very day. Suprematism and constructivism, abstract geometrical art informed how a Soviet citizen of the 1920s saw the world.

One of the most important figures of the period was El Lissitzky (born Lazar Markovich Lissitzky, making his pseudonym out of the way his name read in Yiddish). Initially inspired by Malevich and Shagal, he soon found his own style, most notable in his Proun series — moving from suprematism limited to 2D into 3D space, which served as a foundation for many later experiments in sculpture and architecture. Lissitzky was also one of the direct links between VKHUTEMAS and Bauhaus, having spent several years in the early 1920s in Berlin as the cultural representative of the USSR. You can see Lissitzky’s influence echoing through Bauhaus and beyond, particularly in De Stijl and the works of Piet Mondrian. He died in 1941 in Moscow, making agitation posters to help with the war effort.

Alexander Rodchenko was another significant figure. An artist, photographer, sculptor, and designer, he was one of the founding members of Russian Constructivism. Constructivists saw art as labor, rather than something high and spiritual, they didn’t see a good reason to romanticize art. This only further blurred the fine line between art and design — while there’s a clear difference, the figures of an artist and a designer are hardly mutually exclusive (and here you can read our article on the many touching points between art and design). In 1921, Rodchenko presented three canvases: one red, one yellow, one blue. Thus he declared that painting has been taken to its logical conclusion and painted no more. Quite dramatic. Most of his work after was in photography and the way he experimented with the subject matter and approached it at different angles (literally and figuratively) had inspired generations of photographers to come. He died in Moscow in 1956.

Pay close attention to the layouts, the composition in all the examples in this section — all of these are about a hundred years old, yet they look cutting-edge today. All these simple shapes are used in precision, everything is in its right place. A lot of present-day web designers are greatly influenced by suprematists and constructivists, whether they know it or not.

Why was there even advertising in the USSR? What’s the point if there’s a planned economy and no real competition? This quote by Anastas Mikoyan, a soviet statesman, is from a later period but explains it succinctly — “The task of Soviet advertising is to give people exact information about the goods that are on sale, to help to create new demands, to cultivate new tastes and requirements, to promote the sales of new kinds of goods and to explain their uses to the consumer.” Same principles that define good advertisement anywhere in the world.

The Tedium of Socialist Realism

The promise of a new world that is bright and just was not to last. VKHUTEMAS was dissolved in 1930, and by 1932 every notable artist either left the country or was repressed. What followed was the decades of socialist realism, where half the posters depicted Stalin sagely half-smile at the people. 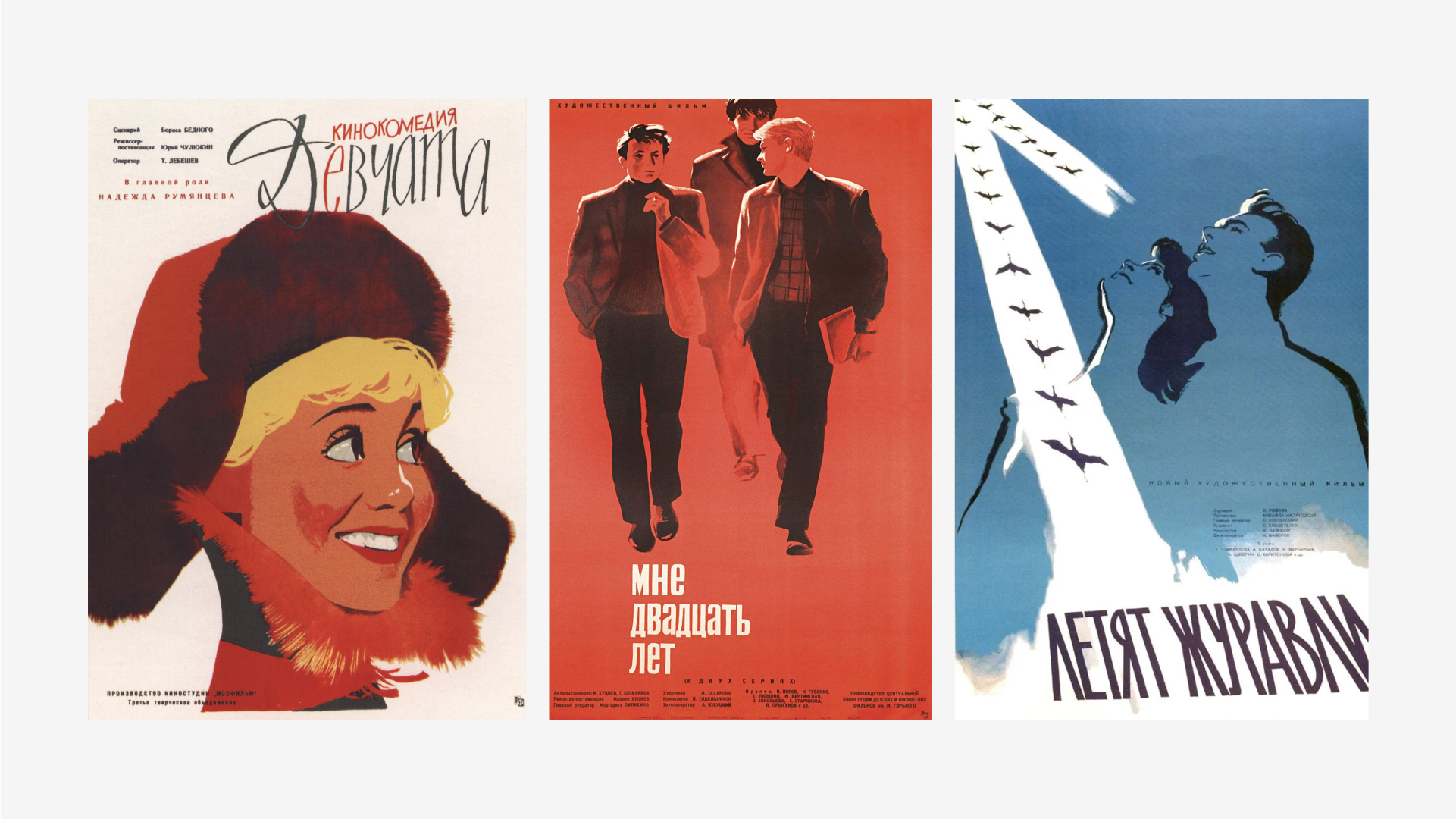 But even if the subject matter got limited, these socialist realism posters still maintained some avant-garde edge, particularly in engaging compositions and bold color schemes. Also, the dull slice of life posters didn’t work to promote tourism: Intourist, the state tour operator, had to look back to constructivist tricks.

VNIITE (an acronym for All-Union Scientific Research Institute of Industrial Design) was formed in 1962, it could be argued, as a reaction to the Kitchen Debate — when Richard Nixon and Nikita Khruschev informally argued over the quality of life in the USA and The Soviet Union at the opening of the American National Exhibition in Moscow on July 24, 1959. Not that Khruschev was particularly progressive — in 1962 he visited 30 Years of the Moscow Artists’ Union abstract art exhibition, and his reaction to it was a barrage of obscenities including some homophobic slurs — but the design was back in the union. Even if too much of it was just western design with serial numbers filed off, there were plenty of interesting ideas. 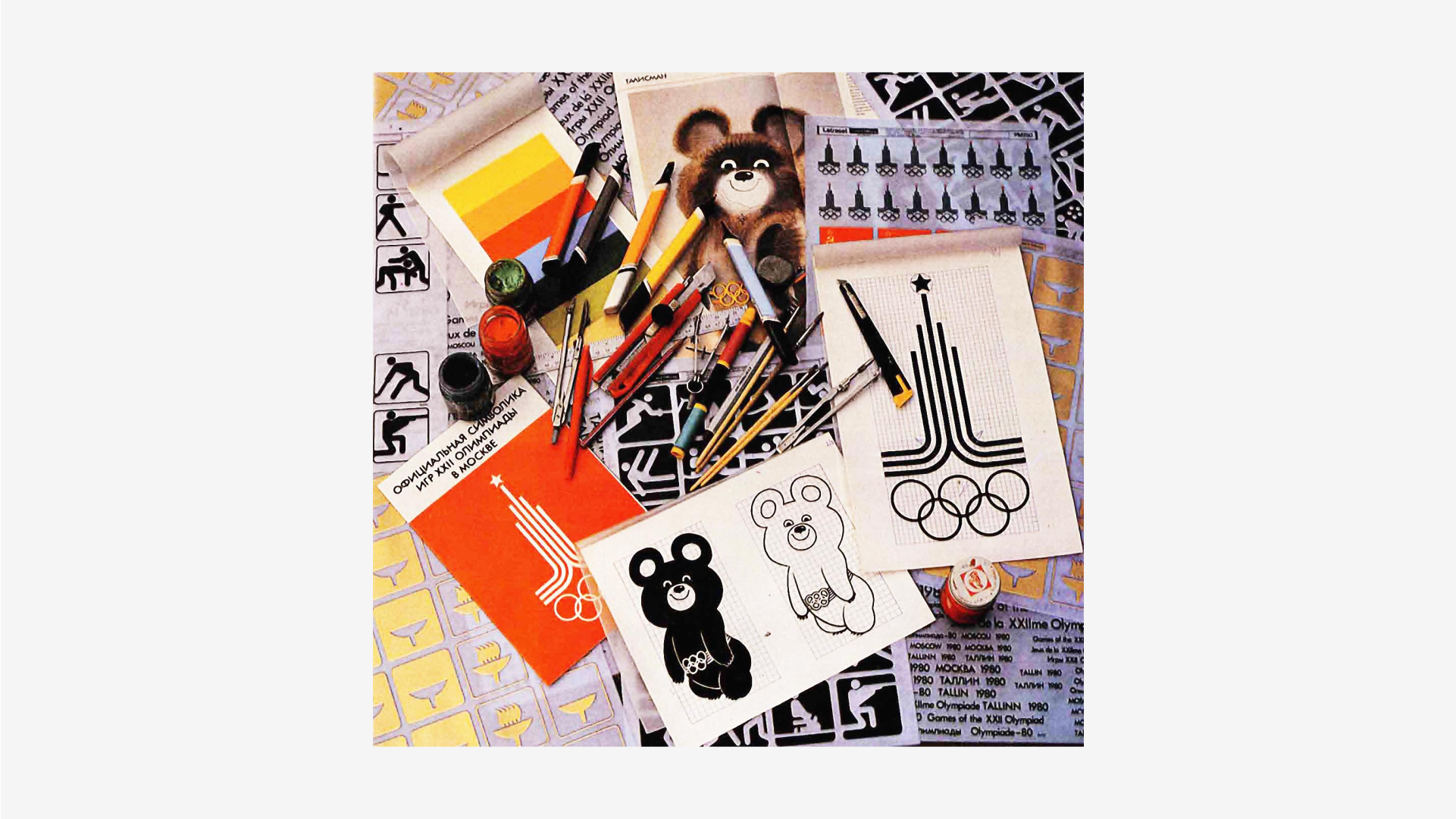 What we would now call branding identity for the 1980 Summer Olympics showed to the world that there’s design in USSR.

The most notable is the pictogram system: 239 symbols were made to make it easy for visitors to navigate the participating cities. The cohesive system stood out among the varied city ads and banners, was comparable to many international signs yet still was uniquely Soviet. And we can’t forget Mishka. Not only this bear cub is simply adorable, look how well the mascot was adapted for different uses. 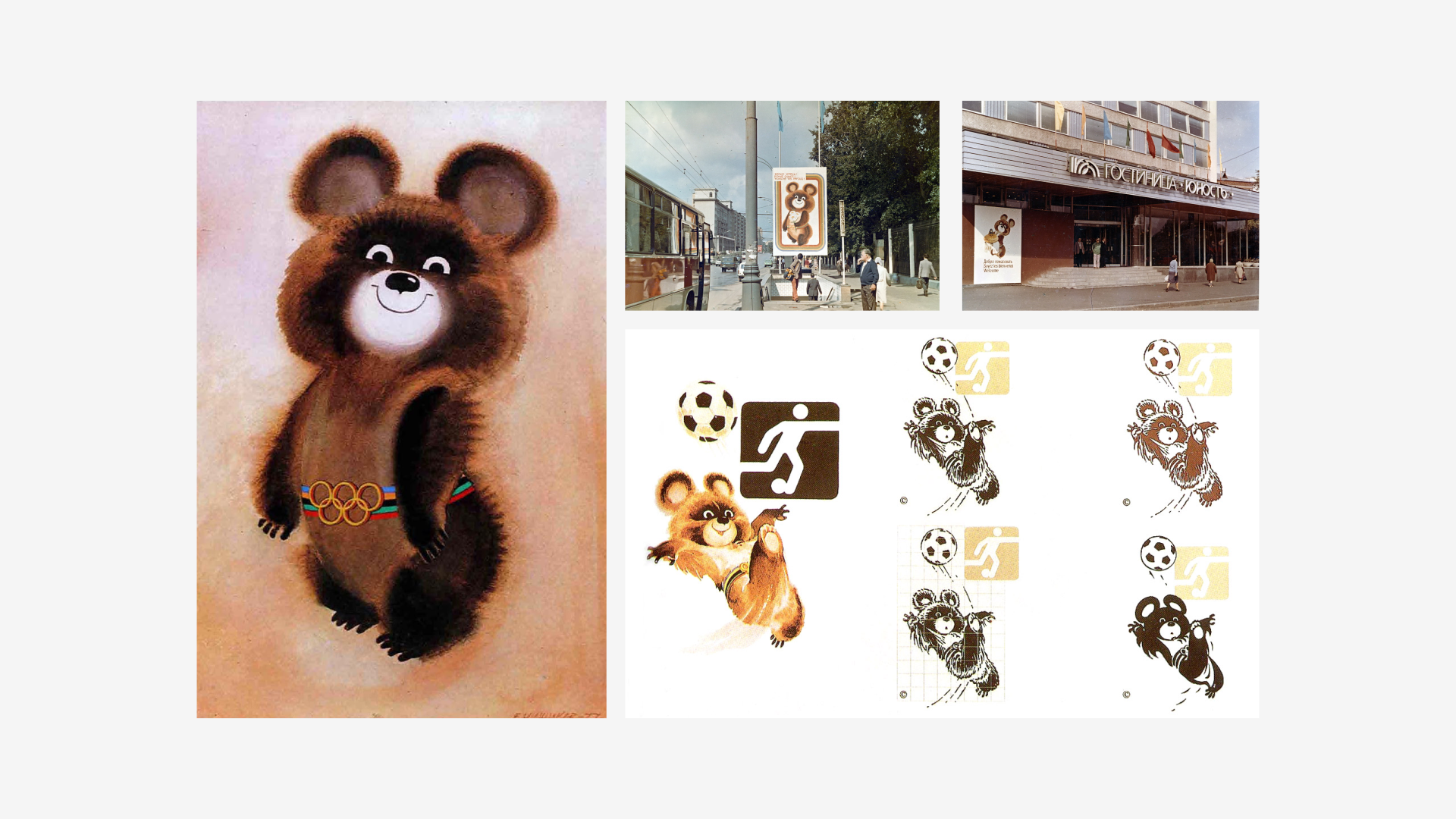 On the naturalistic TV show, the public was asked, what animal should represent us? Over forty thousand different people mailed with all kinds of suggestions, but overwhelmingly, 80% favored the bear cub. The mascot was drawn by Victor Chizhikov.

The Fall of The Union and Soviet Design Today

Even if you live in the post-Soviet space, you seldom see remnants of Soviet Design. We always recommend looking for inspiration beyond the obvious. And to be more particular, we recommend this Instagram account: Soviet Logos, which, unsurprisingly, showcases Soviet Logos.

We’ve only briefly covered Soviet Design — we could not get to the forward-thinking concepts for recycling systems or the concept for a smart house that was designed in 1987 — there was only so much that we could fit into a single article. But what of Soviet Design now?

It doesn’t exist. Occasionally, some solutions are utilized, but mostly as details, and you’ve never seen them — some typography tricks are seldom employed when working with Cyrillics. But this Rodchenko font inspired by constructivists could’ve worked for any number of digital products with bold positioning. Yet, we don’t see anything like that being used. Which is a great shame.