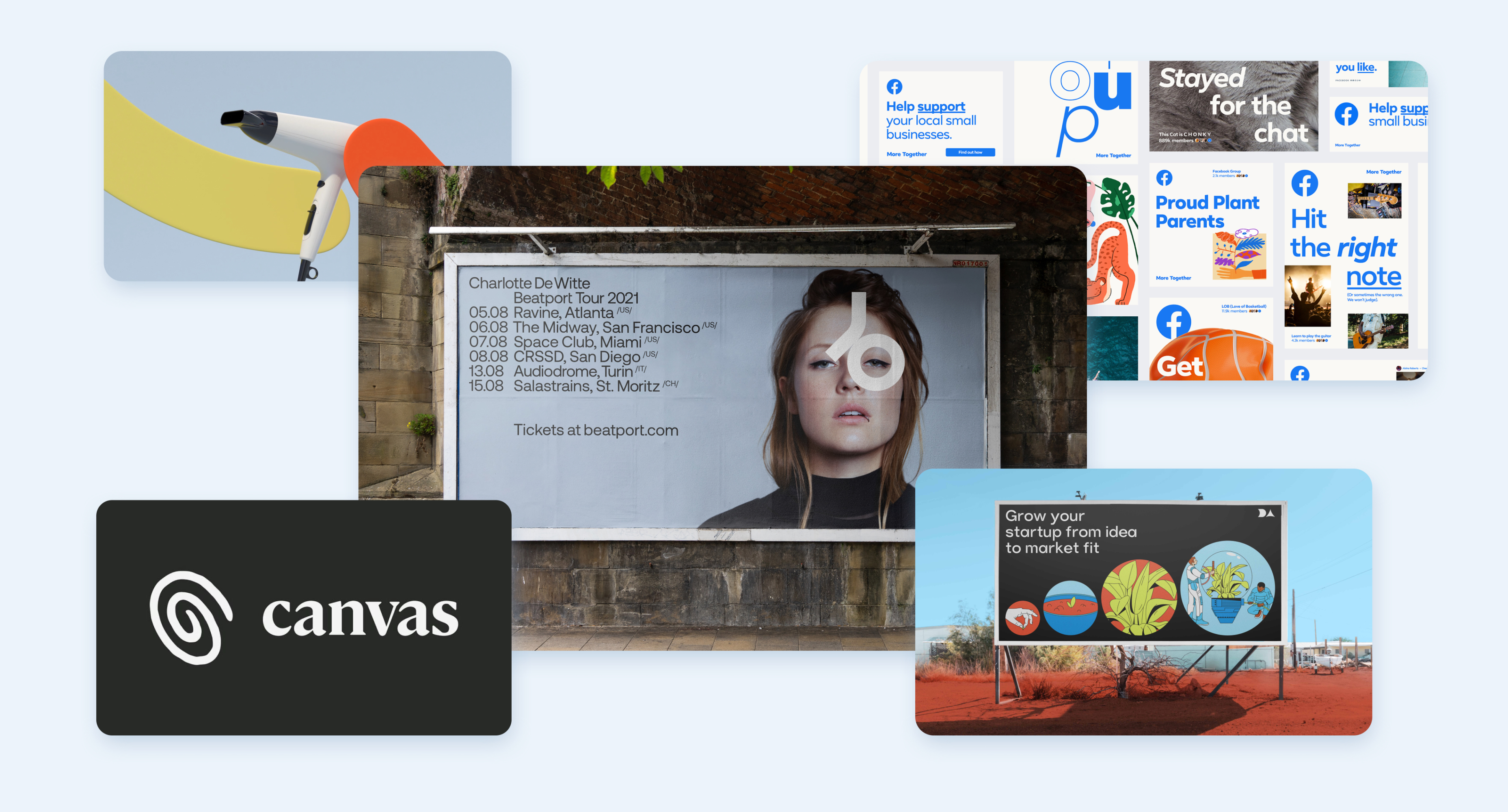 The work is interesting in that the authors decided to challenge the style themselves and add lineart, and 3D, and photos, and whathaveyou, and then, take it all away and leave just the text. And in each iteration, the style worked.

Made by Mother Design and Creative X (the latter being an in-house Facebook creative agency).

When a digital company wants to work with bigger clients they would switch up their positioning and visual identity. SurveyMonkey conducted a survey and then went further — changed their name. Evolution right before our eyes.

"A name sentiment survey of 6,014 people revealed that the brand’s popularity was on-par with Google and Salesforce but not aligned with enterprise software". via Forbes

The brand SurveyMonkey remains around for the B2C segment. The goal to stylistically get into enterprise while remaining in present-day was succeed, using the regular procedure:

But if it works, it works. Also, we have to admit that the shapes here aren’t visual clutter but conceptually refer to graphs and charts.

3. Beatport, and apparently music can now be only black and green

The color scheme for Beatport looks so much like Spotify that we went to check whether Spotify recently bought them out. Nope, they did not. Check the mainpage for Beatport and see for yourself.

It’s curious that they’re in the same segment and decided to look so much like the giant. Bold, in a way.

But the style does have a lot of boldness to it, which you can see in detail in their case on Behance.

HR tech projects lately keep updating themselves to show how human they are, and 15Five is the next one in this affable boiling pot. Here’s the recipe:

Even if the recipe is generic at this point, the style works and solves the goals before it. Works well on the web too:

Another HR tech, but this one breaks from the mold. A service for a career jumpstart that used to be reasonably called Jumpstart is now Canvas, and went through a rebranding with Pentagram.

A serif font remains in place, but with everything else the project stands out in the HR segment.

Fintech Payoneer proudly announced in their blog about their "bold new brand for a bold new world". And then only revealed a new logo.

You can go on their website and see how generic it looks because a circle alone doesn’t really do much. At the time of writing this, it hasn’t been extended and meaningfully used throughout their communication.

The giant competitor to Google in the Eastern European market expands their network of services with, well, Yandex.Services. This one features independent contractors ready to fix a broken faucet, overflowing pipes, and other such handyman tasks.

Wonderful project — cute hands, visual identity matches the brand positioning to the T, it’s vibrant, memorable, and matches but doesn’t get lost with the rest of Yandex products.

We applaud Ony for the services rendered.

And we end the digest with our own project, because we can. Made a brand new visual identity for DeFi Alliance, a North American startup accelerator. Inside the identity is a whole new world.

Taking terraforming as our conceptual basis, we show how DeFi Alliance seeds and unites decentralized finances. Note the illustrations, that might remind you of 60s comic books (or of more recent things inspired by those, say, Moebius, or The Venture Brothers), or of 90s and 00s children’s encyclopedias about space.

And here is the case in full. That’s it for June. No big punchline here. Here's hoping you're having a fun summer.