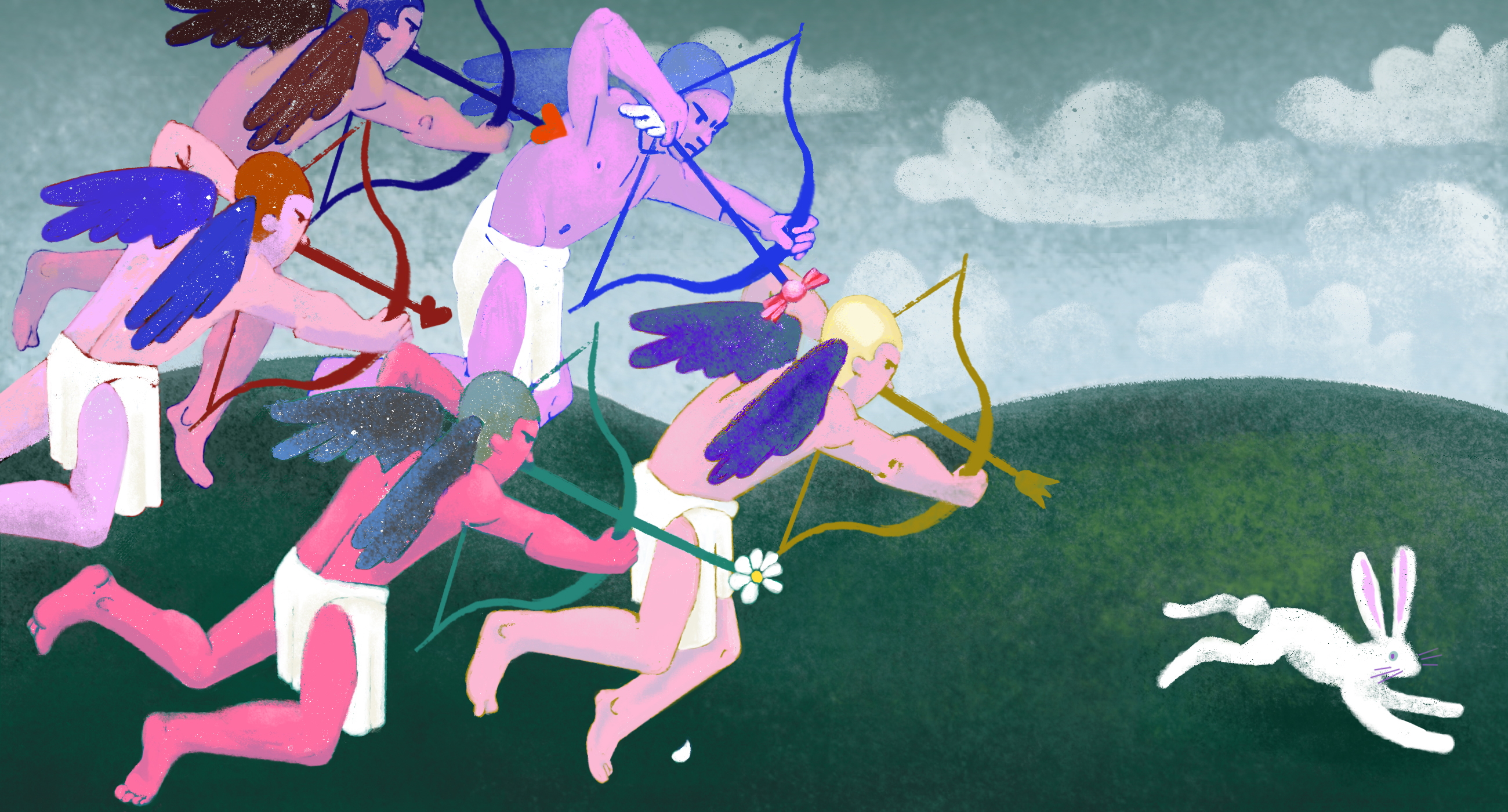 How love was depicted throughout history

Some think of heart shapes and bunny rabbits, there’s a lot of pink and red and purple notes at times, that whole color spectrum fitting neatly over the spectrum of emotions that the word itself evokes; there are flowers, sprawling paintings, anxious hands, intricate postcards, awkward poems delivered with fluttering lips, etc., etc.

Through thousands of years, love took different shapes and forms, and while love is personal, its universal symbols ring personal to us, each with connotations that reach farther than one could expect. Today, there’s a need (yearning? pining?) for empathy, compassion, connection, and a lot of things that fall under the umbrella of the big L.

Maybe this article will help your next amorous-themed promo campaign to reach beyond pink hearts et al. Maybe it will help your brand to be more loving. Or maybe it’ll help disperse the homogenous visual language of branding for sex shops and everything adjacent.

Even before we had all these lofty and contradicting ideas about love, we already had some depictions of it. Here’s an engraving that is believed to represent "sacred marriage", a ritual ensuring fertility among livestock, with the figures embracing and holding hands.

We still live with plenty of remnants of the Greco-Roman culture (even if Mars has been denigrated to being not anyone’s first choice of a candy bar), and the lasting to this day personification of love — Eros/Cupid.

Eros was depicted as a young winged man, and only over time did the depictions armed with bows and arrows become more common. While originally a primordial being, the myths of Eros progressively showed him more as playful and mischievous, and he kept getting younger and younger in his depictions, which eventually lead to Cupid.

The commonly known Roman iteration of Eros, Cupid, is an armed toddler, which is never a good idea. Going forward a bit, by renaissance Cupid multiplied like some sort of amorous gremlin and came to be known as putti.

Today, we are used to popular music being the domain of romance, with the songs largely dealing with falling in, out, or being in love. The tradition started with troubadours in the 11th century in what is now southern France, and troubadours were the first to not only write and sing of secular love, but also the first in the western world to not write in Greek and Latin.

Originally, the word "troubadour" was an insult, meaning, essentially, "someone who makes things up", and troubadours referred to themselves as singers. Troubadours were part of the courts, and the ideals of chivalry required many a baron to pay tribute to the wife of their patron through their troubadours, who were welcomed, encouraged, and materially supported. The existence of troubadours hinged on the existence of feudalism, and so they went away with it.

While the poetry of troubadours largely didn’t have much literary merit, it could be said they were the founders of modern lyric poetry.

And here’s something brand new, directly inspired by troubadours:

We’ve already mentioned the roving gangs of Cupids which took precedence in renaissance art, but there’s a lot more to romantic renaissance paintings than the straightforward depictions. While we may harbor idealistic notions of the period (much like later artists showing the middle ages and the renaissance with naivete, resulting in the troubadour style), there was quite a lot of vulgarity and cruelty.

The paintings were often commissioned as gifts for important occasions in family lives: betrothals, marriages, births. Marriages at the time were chaotic and not properly legislated: the only requirement for a clandestine marriage was the consent of both parties, so the spontaneous weddings took place all over the place. The material objects (such as lavish paintings) were important to legitimize the weddings that were society-sanctioned.

The valentines as we know them first came around in the 19th century, originally handmade and putting no low strain on postal services: in 1841, one year after Uniform Penny Postage, 400,000 valentines were posted throughout England. By 1871, three times that number passed through the General Post Office in London alone.

Starting at the very end of the 18th century, a whole industry arose around valentines, with many guides available on the proper etiquette of what valentine should consist of, visually and textually.

This image of the good old days as the American 50s has its slew of visual signifiers, all sitting on a stool drinking a big glass of milk. We can now approach this imagery with either chiseled earnestness, genuflecting towards everything Norman Rockwell did, or with no small irony (like Lana Del Rey did for the entirety of her body of work).

"Make love not war", proclaimed hippies in response to the stuffy 50s, taking a page from countercultured beatniks, popularizing peace signs and psychedelic imagery in all media (tie-dyed t-shirts, hand-painted minibusses, album covers). It was a big cultural moment, tying together the rising sexual revolution with the hippie movement.

One way or another, revolutions end. And then you have to go back to living in the muck of the day-to-day world.

Match.com was first launched in 1995, and the idea of meeting someone online was validated by the 1997’s You’ve Got Mail, starring Tom Hanks and Meg Ryan.

Of course, now there’s nothing special about meeting someone online. Rather than senselessly throwing the word love around and cheapening it even more in the process, brands tend to show either the excitement of connection (like the ad campaigns for OkCupid), or the comfort and sophistication (like the recent rebrand of Match.com).

The rebrand for Match is particularly notable: going from digitally clinical blue grotesks to something refined, going from a tool to meet people to a place, a place that is elegant, intimate even.

This trend goes far beyond dating apps. There’s a need for empathy, connection; the need for human touch not literally but figuratively as well; everything is more personal. Small brands focus on emotions, passion, even the giants can’t avoid it: e.g., Google changed Material Design to Material You.

It is now imperative for a brand to be direct, and being direct now goes beyond simply presenting your product. Show some love.